I found some time to update the Particle Physics Simulator android application (version 3.7.4) in order to fix some bugs and add a hardcoded menu button, since terminals do not have a dedicated physical button these days. Additionally, my merge request to the F-Droid data repository was accepted, so now the app is also available via the F-Droid store.

The new version 3.6 of the Particle Physics Simulator is now out with customizable star sprites and fading tails. The new tail graphics have an impact in the performance with older devices (just like mine), but should be handled with minor fps drops by newer processors. However, if you encounter problems you can disable tails or set them to “short length” in the preferences screen.

I just published the latest version (3.5) of the Particle Physics Simulator, with a fancy new feature that allows for different-size particles to be shot into the simulation. You’ll notice a frame with a size-changing particle when you hold your touch down for a shoot. The size of that particle at the moment you take the shot is the size of the particle being created. Easy, ain’t it?

The new version of the Particle Physics Simulator (v3.4) is now out. This version brings us the capability to load and save simulations to XML files. Now you can export your simulation to a file and load it later on. 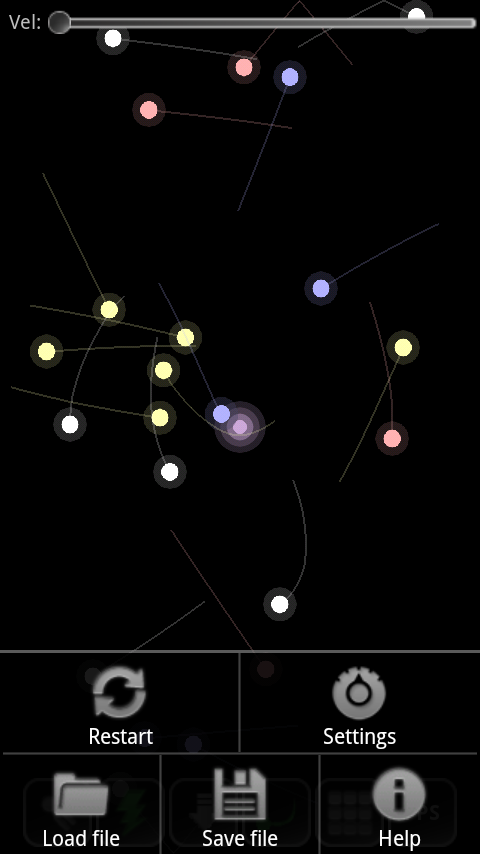 In order to save the current simulation, just open the menu and then tap the “Save file” entry. In the file dialog that pops up select the folder you want to save your simulation and the name of your new file if you want to create one, or the file to overwrite, and tap “select”. It is done, your simulation has been exported to an XML file!

New friction feature has been added to the Particle Physics Simulator v3.3 for Android. Now, particles can be set to have friction so that their velocity will decrease over time at a steady rate. You can make them behave like snooker balls! Also, this version tunes particle tail lengths and adds some interesting performance tweaks that should make it run smoother in handicapped devices.

I am a Software Engineer interested in astrophysics and scientific visualisation. I live in Heidelberg (Germany) and struggle to learn the language and comprehend German culture. I'm currently working on CU3/CU9/Gaia at ARI/ZAH@Uni-Heidelberg and I'm also a Ph.D. candidate at the viscomp group, IWR@Uni-Heidelberg.